I measured TinyTot’s feet according to charts and instructions on the Riedell and Jackson websites, but I figured I should take my own advice and get a good professional fitting.

Not only is it good to get a professional opinion, but it’s really fun for the little skater.

When we got to the skate & ski shop, I filled out a brief survey about her skating level and intended use of the skates. They carefully measured her feet and got out little skating socks for her -“just like (SkaterGirl)’s,” TinyTot giggled. (Shopping note to self: get a little pair of skating socks) 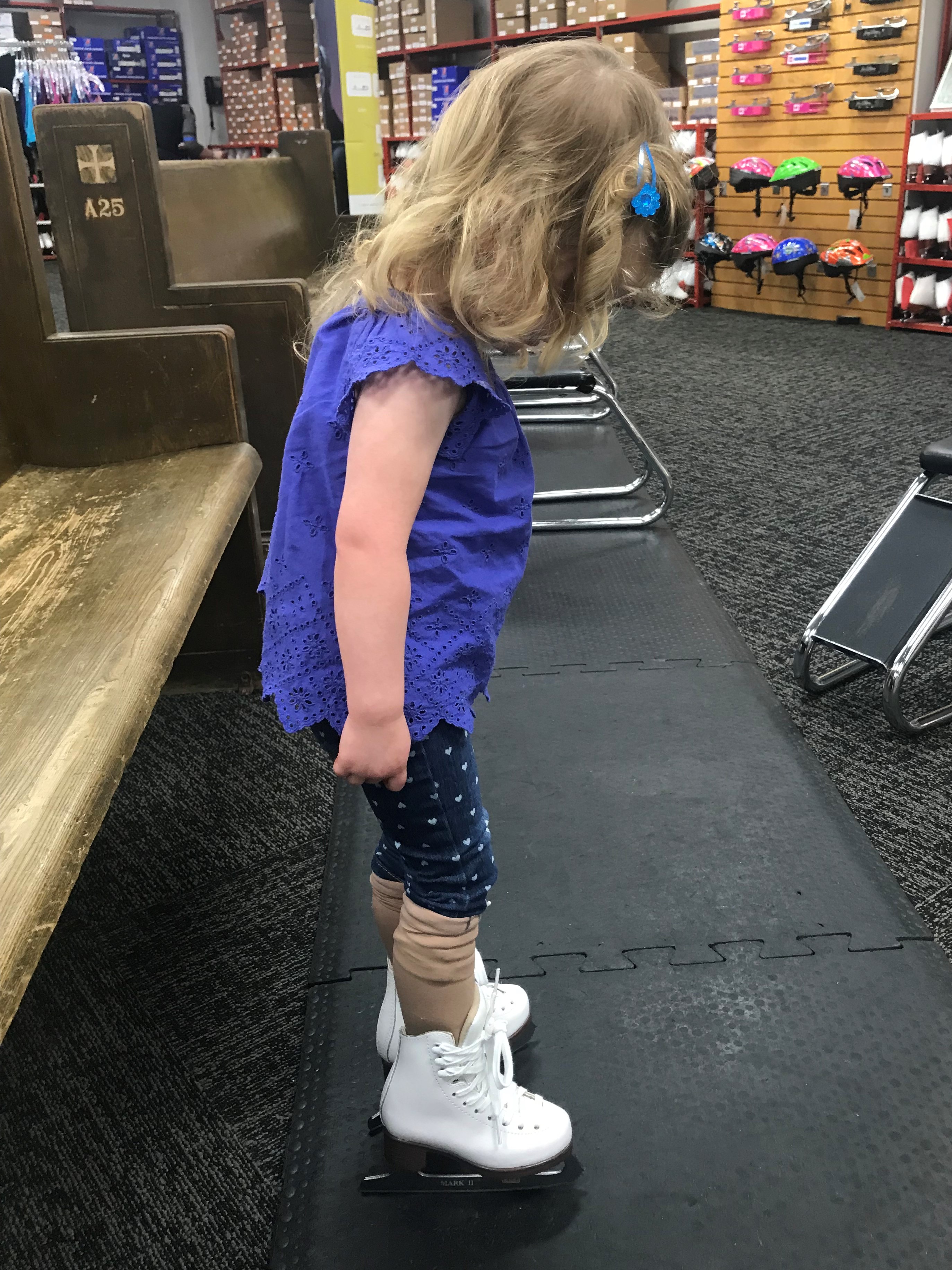 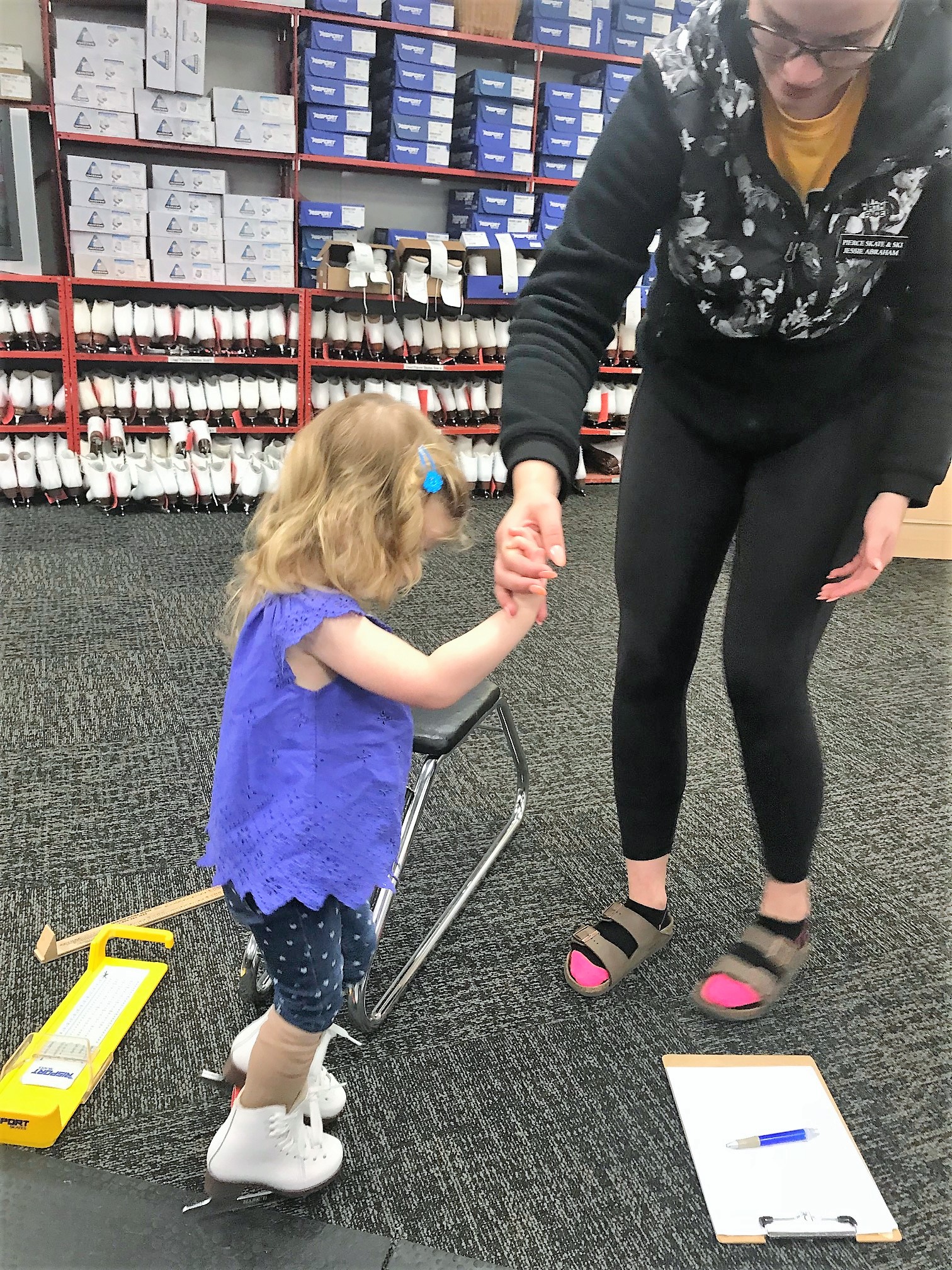 I mean. Seriously! How cute are those itty bitty skates?! And they fit perfectly! Jackson skates, at least for girls, run smaller. A 7 in Riedell is an 8 in Jackson (approximately). So I asked the big question: What do these cost? Jackson Mystique, Toddler Size 8 = $119. So… yeah… more than I had planned to spend for first-lesson-on-the-ice skates.

I haven’t given up on finding used skates (yet!) so, for now, the search continues…

I have finally been convinced (read: worn down by pleading) that SkaterGirl’s little sister TinyTot, age almost-3, is ready to take her first skating lessons! #HerTurn

I successfully signed TinyTot up for a beginner ISI Tots class that starts in June. I figured summer would be less stressful from a family scheduling point of view. We’ve got the snow pants, mittens, helmet all ready to go! Queen Mommy is so far ahead of the game this time around! (see first child MomFail)

Oh no no no. Not nearly that easy. The rink doesn’t rent skates small enough for TinyTot! She needs an itty bitty size 7. I have driven to and called sports resellers all over town. I’ve posted “ISO teeny tiny skates” on the Facebook sites. Nothing. Hmm… Could it be that TinyTot gets brand new skates before SkaterGirl?

*sigh* I hope she doesn’t change her mind about wanting to skate.

You’re now committed both to owning skates and your Kiddo’s increasing interest in the sport. I’m going to share what I’ve learned so far about how to protect your investment…

What you’ll need: Hard guards and a towel/washcloth

Hard guards (must have):

In order to protect those shiny newly-sharpened blades, you need hard rubber skate guards. SkaterGirl puts them on when she puts on her skates, takes them off at the door to the ice, puts them back on the minute she steps off the ice, and then puts them away when she takes off her skates. Please don’t let kiddos walk around more than necessary on naked blades.

The guards retail for $5-15. The hockey/winter sports store can cut them to fit the skates. 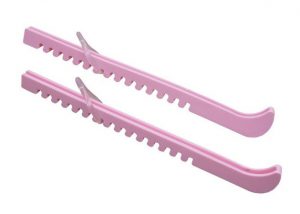 The hard guards that SkaterGirl and all of her young SkaterFriends consider a must-have are called Rockerz. They retail for $30-50. Because of course they do. 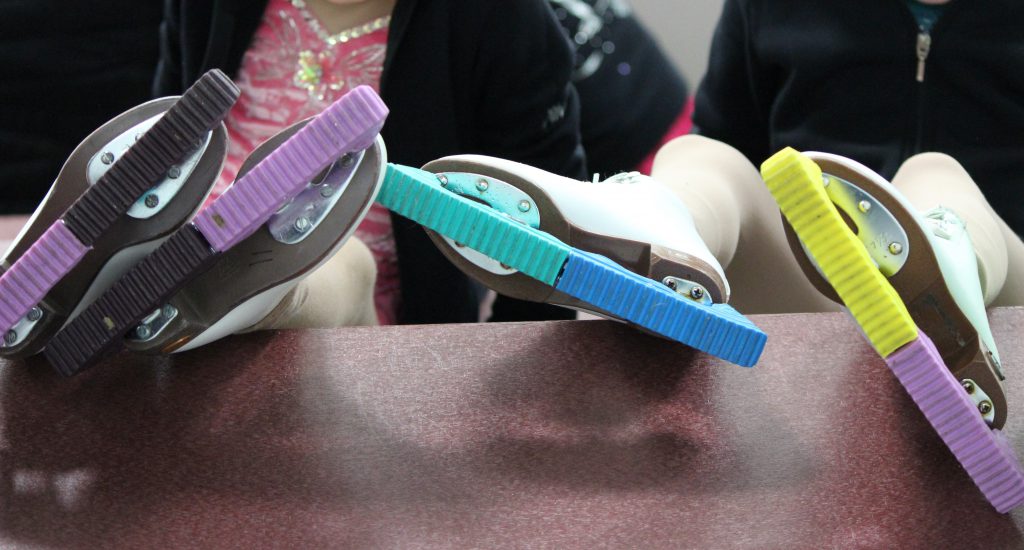 To be fair, the Rockerz are evidently much easier to walk in, and they stay on the skate better. But like everything else, the price… *sigh*

They need to be cut and fitted to the specific skates on which they will be used. We bought SkaterGirl’s first set from a vendor who fitted them to her skates at a competition last year. They come in seemingly every color, and can be mixed and matched. I have to admit that they do seem to be really good quality hard guards.

DO NOT leave the hard guards on the skates when you take the skates off! I had no idea this was a no-no prior to beginning my SkateMom education. But it makes sense. The hard guards trap in any remaining moisture that will rust the blades. Noooo! The pro (and I mean PRO) who sharpens SkaterGirl’s skates even suggests taking the skates out of the bag to breathe without anything on them overnight. We don’t have a good space in our entryway where naked breathing skate blades can be safe, so we compromise by just unzipping and opening the skate bag for now.

These are soft blade “guards” that do two things, as I understand it. 1. They soak up any remaining moisture from the blade and 2. Protect the blade when it’s in the skate bag. They are not meant to be walked in.

Like everything else, there’s a wide variety of soakers. They retail from $8 or 9 to $25ish. 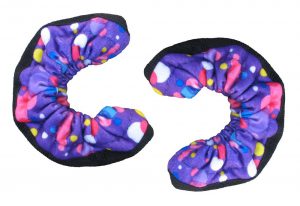 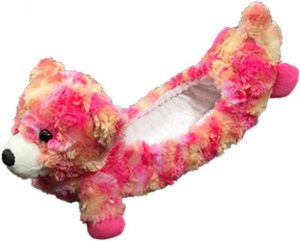 Basic soakers are also really easy to make with a little bit of elastic, cotton terry cloth, and either cotton or fleece material. (pattern coming soon to QueenMom.me)

When SkaterGirl is done, she thoroughly dries her skates and blades with an old (clean) washcloth. Pretty important that they get put away dry to prevent mold and rust.

At some point kiddo’s skates will cost as much as an iPad. You wouldn’t just throw your iPad in a skate bag and let it get banged around in transit without some sort of cover. Neither will you want to transport those skates without some sort of protection. For a while we carefully wrapped the skates in hand towels I found on clearance at Target. Then I realized I could pretty easily turn those clearance hand towels into bags that are more secure and easier to use! Watch for more on that little sewing project soon.

We started out with a backpack. Which worked just fine. 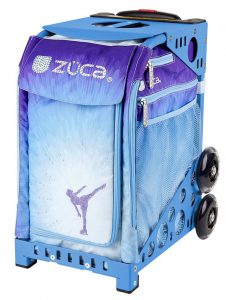 But SkaterGirl and her SkaterFriends are all about the Zuca bags. Again, if you can find one used, do it! The sturdy metal frame and bag insert are sold separately. So even if you find a used frame, then you only have to buy the insert. Santa brought SkaterGirl a Zuca two Christmases ago. Still a big hit! The best part about it is that I have somewhere to sit while tying her skates. And it rolls (on light-up wheels!) so she can get it out to the car herself. The light-up wheels are fun, but they also serve a purpose. All winter it’s dark by the time we leave the rink. Those wheels really show up in a busy parking lot!

The older girls mostly use duffle bags, not Zucas. I’m sure, when it’s time, Kiddo will let you know what she/he wants. 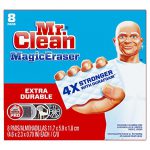 Get a Magic Eraser. I am not paid in any way to say that -though if P&G wants to pay me for that opinion, I won’t say no 😉

I’ve heard that sneaker whitener also works, but I haven’t had to use it yet on SkaterGirl’s skates.

Skaters work hard and get sweaty just like any other athlete. Sometimes skates and skating bags smell less than daisy fresh, if you get my meaning. Throw what you can in the washing machine as often as you can, keep the sweaty socks in breathable pockets on the outside of the bag, and leave the bag open overnight. If/when that doesn’t solve Kiddo’s problem, kick it up to the next level.

You need small packets filled with silica gel, like the little packets you find in the pockets of new clothing or in shoeboxes. Silica gel absorbs moisture and odor, like baking soda or rice. Stinkeez are often sold at competitions. They are usually in cute shapes of lizards, snakes, or other animals. They are also relatively easy to make. I’ll post some ideas and patterns soon. They make great gifts for athletes of all kinds. 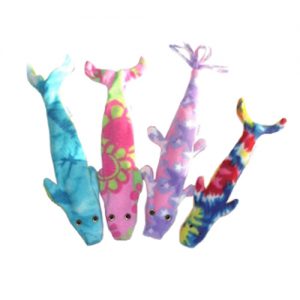 What are your can’t-live-without skate care must-haves?

Please use the comments section to add to the list!